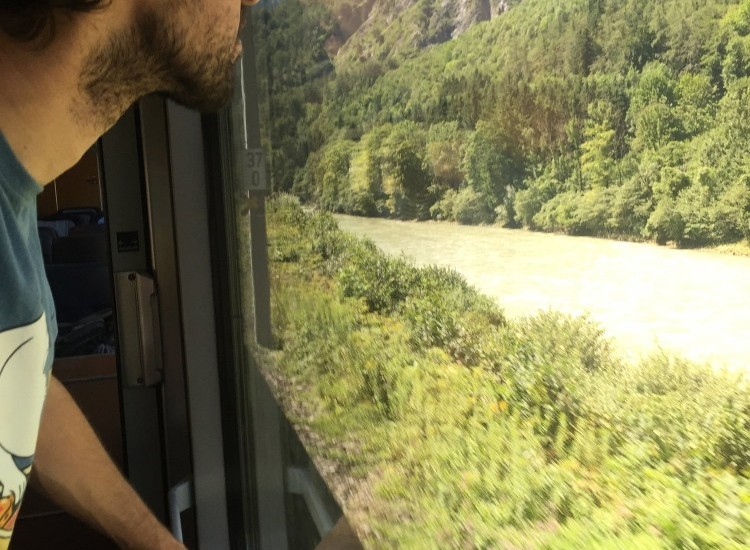 I put the following piece up on the site I keep on Slovak travel, the Englishman in Slovakia, recently. But I thought that given how much time I’ve devoted to riding the rails across the good continent of Europe of late (and, indeed, still am right at this moment), that I would publish this here too: a meditation on how long-distance train travel could and should continue to play an important part in our lives and just might enhance them…

People gave me incredulous looks when I told them I’d be taking the train from the UK to Slovakia the next time I needed to do the journey. People often give you incredulous looks, I’ve found, when you attempt to do something that is not done in the most efficient or obvious way. So of course I had all those “why don’t you just fly?” types of responses. Well here’s why.

The question would not even have been asked as little as twenty-five years ago, before cheap flights existed to Eastern Europe. Across the continent within that quarter of a century, the soul-sapping trek to the airport for the ungodly departure times, the agonising hour-long negotiating of check-in/security alongside hundreds of other fed-up people, the being cooped up like a chicken in a hard plastic seat with zero leg room and the arrival at an airport anything from 30 minutes to several hours from where you actually want to end up has become the standard practice. And we have forgotten that the way we would have travelled across Europe back in the day was by train, and dispensed with the notion that we still could – and, perhaps, should.

It is hard to fathom why, because time is not the only factor when travelling. Comfort is also a factor. Actually seeing the places you are passing through can be a factor. The environment is definitely a factor. Having an adventure can be a factor.

For me the journey can (if you pick the right method) be as enjoyable as the arrival; sometimes more so.

Cheap flights are painless at best but very rarely enjoyable, and quite frequently nightmarish experiences. Travelling by train retains some of the old-fashioned glamour travel possessed in the past. You invariably get a seat to yourself. You always get decent amounts of leg room. There is no shortage of space to put your luggage. There are aisles and corridors to take a leg-stretch. There is, across Europe, dining cars and often bars to which you can sojourn, where you can eat half-decent food from proper plates, with real knives and forks, and be waited on by waiters or waitresses who actually understand what the word “service” means.

The scenery unfolding outside is certainly more absorbing than a view of clouds. More to the point, if you really like it, it’s possible to stop off en route for a lunch or a little exploration. No – I’ll go further: it’s advisable to stop off: at least once. Celebrating slow travel and the heightened cultural experience that goes with it are part of the philosophy of long-distance railway rides. And when you stop, you’re not going to be in a far-from-the-centre airport: you’ll be smack bang in the thick of your destination.

The environmental argument is one that fans of train travel can also use: it’s considerably less of a carbon footprint than a plane journey.

And because we seldom think these days of using train as a plausible means of travel between the UK and any other point beyond Eurostar’s Paris and Brussels terminals (or if we do, only as part of a gap year one-off Interrailing session) you are embarking on an actual adventure: one that will have a lot more to relate than a typical cheap flight story of torturous queues, duty free and cramped seating.

Of course, in the second decade of the 21st century, we are more obsessed by time than ever (even though we probably waste more than ever on TV, video games and social media) so train travel takes a back seat: it remains a somewhat “maverick” form of travelling long distances across Europe.

Particularly where Slovakia is concerned, however, travelling by train also has some other real plusses. It allows you to visually connect up Europe and the place of Slovakia (or whatever happens to be your destination) within it. It puts it concretely “on the map” so to speak, which given the fact so many people cannot place the nation on a map whatsoever can be a good idea. And there is a great sense of fulfillment in journeying to the frontier of the EU (the westernmost point of the EU’s eastern border, in fact). When you alight from the train here you can let it sink in how far you have come overland, via each twist and rattle of the track, to a place where things are very clearly very different: where the hills are high and green, where the churches are made of wood and the Eastern Orthodox Faith takes hold, where wolves and bears thrive in the dense forests.

And here’s the other thing. I am a writer. And coming on such a journey on the train I can sit with a good wifi connection, devices charging, and write. I can’t do that on any cheap flight. And that’s important to me: recording the journey as it unfolds right outside the window, every forgotten farmstead, copse, castle, family barbecue and smartly-dressed station master of it. In an age of selfies, a lot of time is spent capturing the moments of a journey in pictures, but train travel affords the opportunity to capture it in words.

So whilst riding the rails loses out to cheap air travel time-wise where Slovakia is concerned, and nearly always cost-wise (you’re looking at £200, most likely, for a one-way trip to the east of Slovakia from the UK – if purchased a little in advance), it wins for the glamour, the green-ness and yes, the sheer joy of the experience.